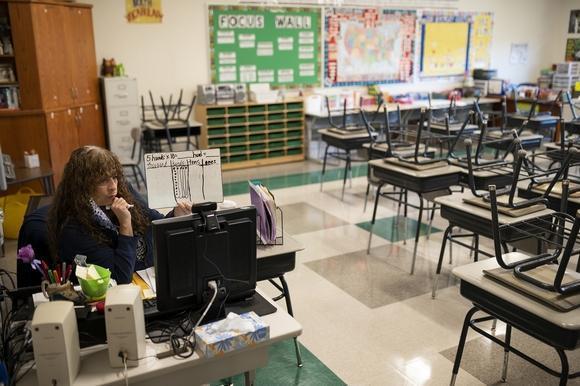 Lori McAfee teaches fourth grade math to her students via Zoom from her empty classroom at the Wire Village School in Spencer, MA.  [T&G Staff/Ashley Green] 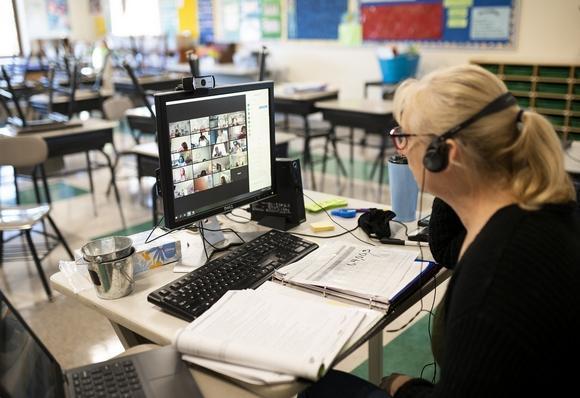 Fourth-grade teacher Christina Reeve instructs her students via Zoom from her classroom at the Wire Village School in Spencer, MA.  [T&G Staff/Ashley Green] 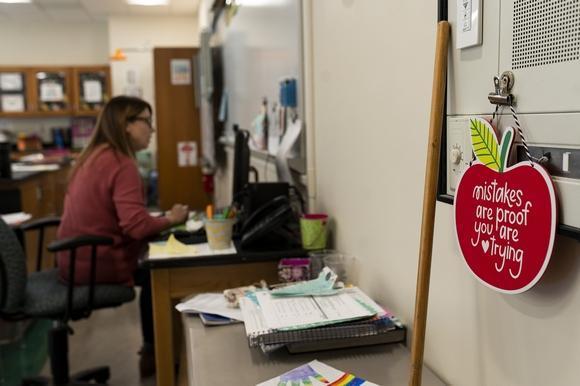 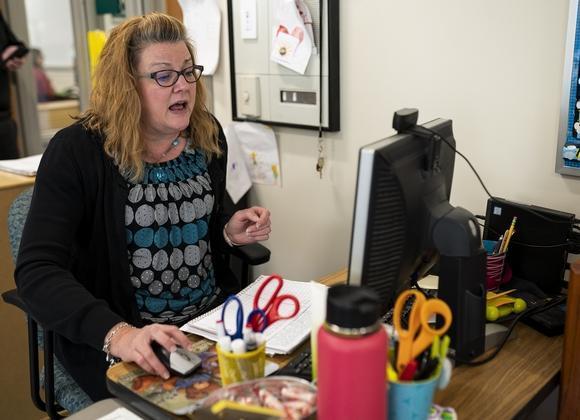 Darcy Specht puts a worksheet on the screen while teaching her fourth grade students via Zoom from her classroom at the Wire Village School in Spencer, MA.  [T&G Staff/Ashley Green]

WORCESTER — The school system’s switch to remote learning this year has created unprecedented hardships. But it may have also pushed the district to more fully address a problem that existed even before the pandemic, according to the school superintendent.

This fall, the district has rolled out a number of new initiatives aimed at keeping track of struggling students and providing more information to parents about their kids’ academic performance, Worcester Schools Superintendent Maureen Binienda said.

Those types of efforts are even more critical now that school staff are not able to physically interact with students during the ongoing remote learning phase of the new school year.

“I think the remote has actually caused some good practices to be expanded,” Binienda said. “We have to find more ways to keep track of kids.”

The district’s new approaches include twice-a-week check-ins with students, a more “aggressive” assessment system, and an update of the parent portal that gives families more information about how their children are doing in school, according to the superintendent.

Those initiatives are all aimed at making sure students are not falling through the cracks — a risk that existed even prior to this year.

Other districts are also doing more outreach this fall, including Fitchburg, another remote learning district that hired a bilingual liaison over the summer to make contact with at-risk families in the city, according to Superintendent Robert Jokela.

“This person checked on families, visited, brought school supplies and food,” he said, adding she held two family drive-by events at the district’s central office to hand out supplies as well.

Even districts that are doing hybrid models this fall, in which students have the option of receiving a mix of in-person and remote instruction, there is an increased emphasis this year on tracking student participation and performance.

“This begins with simply capturing attendance. While that sounds simple, in a remote environment it is not,” said Jeffrey Villar, receiver/superintendent in Southbridge, which is offering both in-person and remote learning options to students this year. “There are multiple opportunities each day for technology issues to interrupt student efforts to engage in online learning.”

Family outreach, often via each school’s designated family liaison, is part of the district’s response, as is modifying its data systems to improve tracking virtually.

On the academic side, Southbridge is also finding new ways to mine data from various learning software students are using this year to measure performance, Villar said, in addition to more “traditional approaches” like classroom grades.

In Spencer-East Brookfield, which is also doing a hybrid learning model this fall, the first two weeks of the school year were especially important for identifying struggling students, according to superintendent Paul Haughey.

“We not only assessed our students in academics but actively began screening students for any mental health/emotional concerns with our guidance and adjustments counselors taking the lead,” he said, adding the district also sought assistance from outside agencies for students with significant needs.

More recently, on Sept. 28, Spencer-East Brookfield also established its Learning Center, a program for students with academic and mental health and emotional needs that allows the district “to tailor our programs and services to the needs of small cohorts of students at a time consistently with in-person learning Monday through Thursday” for fourth through 12th grade, Haughey said.

“Despite valiant efforts on the part of classroom teachers and our parents, there is a sobering reality that the learning that happens in classrooms is very difficult to replicate with students learning remotely at home,” Villar said.

Remote learning also may make it easier for students to withdraw from their schooling; Southbridge has so far identified 20 students who are not doing the work at all, and “there are many other students who have intermittent participation at best,” he said.

A small percentage of Worcester students are also not participating at expected levels, Binienda said, but overall she felt the district’s daily attendance rate, which typically hovers in the 90s, is comparable to pre-pandemic rates.

Fitchburg, too, has not seen any major enrollment changes in the upper grades since last year, although kindergarten numbers have fallen, Jokela said, possibly due in part to the fact kindergarten is optional this year.

“I think it might be a little more difficult now because of COVID” to reach families of students who are missing school, Binienda said, because staff can’t go into a house to meet with a family like before.

In rare cases where the district still can’t make contact with a family after multiple tries via phone calls, emails and in-person visits, it has resorted to alerting the state’s Department of Children and Families.

Even before that step, however, Binienda said the schools have relationships with many supervisors in the department, and will make informal checks to see if they have had any contact with or knowledge of a family that is not responding.

For similar reasons, the schools are doing more work this fall with local organizations that are more plugged into the city’s immigrant communities, according to the superintendent, since they might also have relationships with some families.

On the academic side, meanwhile, Binienda said the MCAS looms next spring, after the state’s main assessment was called off earlier this year as the pandemic was just getting going in Massachusetts.

That will be a major test of schools’ remote learning, and in preparation Worcester plans to start after-school, virtual MCAS tutoring next month.