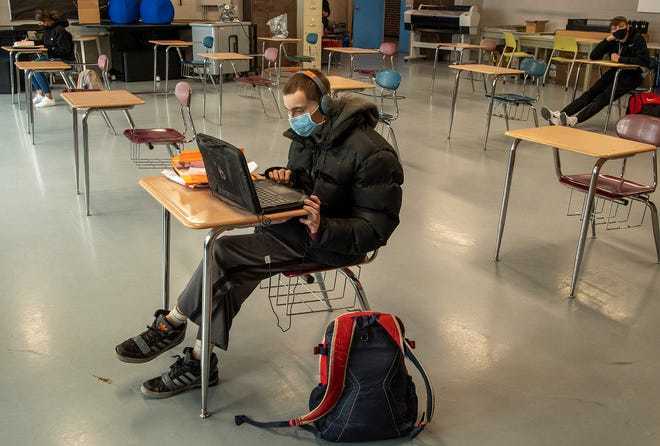 While there has been unease in education about the growing influence of testing in schools over the years, some districts are leaning on standardized assessments in new ways this year to grapple with the wide-ranging effects of the pandemic.

Around the corner, meanwhile, is the MCAS, which the state’s Department of Elementary and Secondary Education has told schools will happen this spring despite the uncertainty of the coronavirus – and varying opinions around the state about whether the state’s main assessment is necessary this year.

The question underpinning much of the discussion around testing this school year is how much learning has been achieved over the past nine months amid significant disruptions to normal classroom teaching.

Most districts have only been able to facilitate part-time in-person instruction. Others, including the region’s largest system, Worcester, have had to teach students remotely since the pandemic began in March.

Schools as a result have developed district-level testing plans this fall to determine where students are in their learning, and establish a baseline to compare future assessment results to.

So far, schools are finding the impact of the coronavirus, not unexpectedly, has hurt many students’ academic progress.

“Assessment is a complex science and education is a multivariate endeavor so it is very difficult to create conditions where we can be absolutely sure that one variable has caused another,” said Jeffrey Villar, receiver/superintendent of the Southbridge schools. “However, in a broad review of student learning data collected in grades (kindergarten through fifth grade), we do see results lower than anticipated for many students."

That was also the case in Worcester, where the district’s Star assessment results earlier this fall showed students overall did worse than last year on the test. That trend was not across the board – some of the higher grades, especially ninth grade, actually did better on this year’s assessments – but it was especially prominent in the upper elementary grades, where students struggled on the math exam in particular.

The percentage of fourth-, fifth- and sixth-graders scoring at or above the 40th percentile mark – the district’s self-set benchmark – on the Star math test this fall, for example, was 12, 20 and 10 percentage points below last school year. Students in those grades also did slightly worse on the reading test compared to last year.

School officials in Worcester and other districts, however, have stressed direct comparisons between years may not tell much about students’ academic growth. Some school systems had problems even just getting students to take an exam because of the obstacles posed by remote and hybrid learning.

“We had a really hard time making sure every student was taking the test,” said Jonathan Thompson, assistant superintendent of curriculum and Title I for the Fitchburg schools, which used an assessment called i-Ready in October. School staff even went out to children’s homes to schedule testing times in person if they weren’t responding to messages, he added.

Like in Worcester, Fitchburg students struggled on the math assessment in particular, at least more then on the reading test, according to Thompson. Whether those scores can be improved upon when students take the i-Ready again in January, he said, “is the million dollar question,” given all the uncertainty that remains about how the pandemic will evolve – and schools will respond – this winter.

Some school systems, meanwhile, are going more slowly with district-level assessments, including Spencer-East Brookfield, which sidelined its usual three-times-a-year NWEA testing schedule, which typically has students sit for the baseline exam in September.

“We wanted to give all of our students a chance to get their footing and slowly determine their social emotional learning needs first then the academics second,” Superintendent Paul Haughey said.

The district is planning to administer a local math test and the DIBELS reading test in January.

Districts will not have a choice to take things at their own pace in the spring, however, when the MCAS will be held. High school students, who need to pass the assessment to graduate, will take the test even earlier, as soon as January.

School officials seemed to be split on whether it’s even a good idea to attempt a statewide testing program this year, even after exams had to be canceled this past spring because of the sudden arrival of the coronavirus.

“Conducting high-stakes testing in the midst of a pandemic, and let's be clear here – an international public health crisis – just seems like a step too far,” Haughey said.

While he could appreciate the need for older students to take the test to graduate, “it really is about what is our objective here. What are we trying to achieve with MCAS? And that is a much bigger question that deserves deeper and more meaningful conversation given the current pandemic.”

One of the major considerations in that debate is just how much the pandemic has disadvantaged already disadvantaged students, who because of many circumstances that are no fault of their own tend to do worse on the MCAS than students in wealthier districts.

It’s mostly been larger, urban systems, for example, that have had to rely more on remote learning this fall, while smaller, suburban districts had the resources and logistical capabilities necessary to pull off hybrid remote/in-person models.

“I think it comes down to the equity issue,” Thompson said. “I think that’s going to be big, and it’s why I don’t think we should have (the MCAS this year).”

Some school officials, however, are embracing the MCAS as the next step after their own assessment efforts so far this year.

“We need a better tool to more accurately measure the learning loss, and that is why I hope that conditions improve substantially and we are able to assess students with the MCAS this spring,” Villar said. “The data collected through this test are valid and reliable.”

And on the flip side of the equity consideration, Villar contended that if the MCAS shows there has been as much as learning loss as suspected because of the pandemic, those results will provide a powerful argument to state budget-makers that districts like Southbridge will need more funding to bring up the kids that struggled the most.

Given the upheaval of this past year – and the continued troubles expected in the months to come – some education experts see the MCAS as a reset of education expectations.

“Really what teachers are trying to work on right now is making up a year and a half of growth” in one school year, said professor Holly Dolan, chair of the Education Department at Clark University. “That is an enormous task.”

Consequently, Dolan sees whatever results come out of this year’s MCAS as the basis for “sort of a restart moving forward.”

She and local school officials pointed out, however, that treatment of the MCAS doesn’t mean this year is a lost cause. “I think it’s almost the opposite,” Dolan said, as teachers, administrators and families stretch themselves to squeeze some learning out difficult circumstances.

“We’re seeing students getting better at self-advocating for themselves, some are getting better at managing their schedules,” Dolan said, while educators are “widening their instructional practice” in new ways and parents “seem to be much stronger partners” with their schools.

Districts are also finding ways to work around the realities of social distancing to make sure students aren’t falling through the cracks.

In Fitchburg, for instance, families have been dropping off young children for 15-minute reading tests at the schools while the district is remote, according to Thompson – a reflection of the lengths the must be taken now to accomplish what were once simple tasks.

With or without the MCAS, schools are accountable, he said. “That’s what we’re doing right now with the assessments we’re having.”