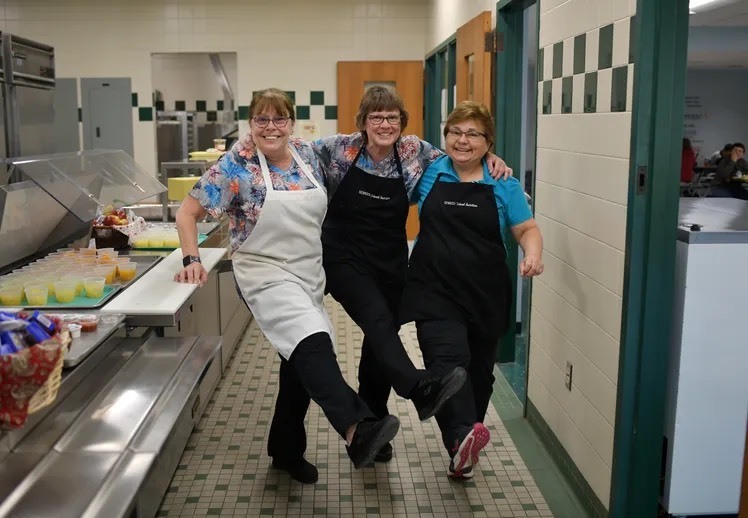 SPENCER, MA — For the last 30 years, Doreen Lambert has been finding ways of getting students in the Spencer-East Brookfield School District to eat their fruits and vegetables.

Lambert is one of many food service staff members in the district that also includes Diane LaCroix, Jerilyn Paige and Lori Provencher, who are being celebrated at “School Lunch Hero Day” in the district Friday.

“We have our fun but we're busy. It's very time-consuming,” Lambert said. “It's a very physical job.”

The group of workers are not only being recognized for serving students at mealtimes but also for the other work that often goes unnoticed, such as keeping the kitchen and cafeteria clean, packing and serving lunches during summer camps, or making sure students are getting enough fruits and veggies with their meals.

"We have our fun but we're busy. It's very time-consuming. It's a very physical job." - Doreen Lambert, Food Service Staff Member

Lambert said she recently spoke with a high school student who said he didn’t “do peaches.”

“I said, 'Honey, these are canned peaches. They're not just fresh fruit … I mean, fresh fruit is good but … have you ever tasted them?’ and he said ‘No,’" she said. “I said, ‘Well come on — you gotta promise me to just taste them,’ and (now) he likes them.”

Throughout the week, students have made posters and taken the time to acknowledge the work being done by the staff, with one of the students even gifting a book to Paige, who has been working in the district for over 20 years.

The book, “Lunch Lady and the Cyborg Substitute” by Worcester native Jarrett K. Krosoczka, is a graphic novel about a lunch lady who not only serves school lunches but also investigates and solves wrongdoing.

Paige said that one of the best parts of her job is the students and developing a rapport with them. 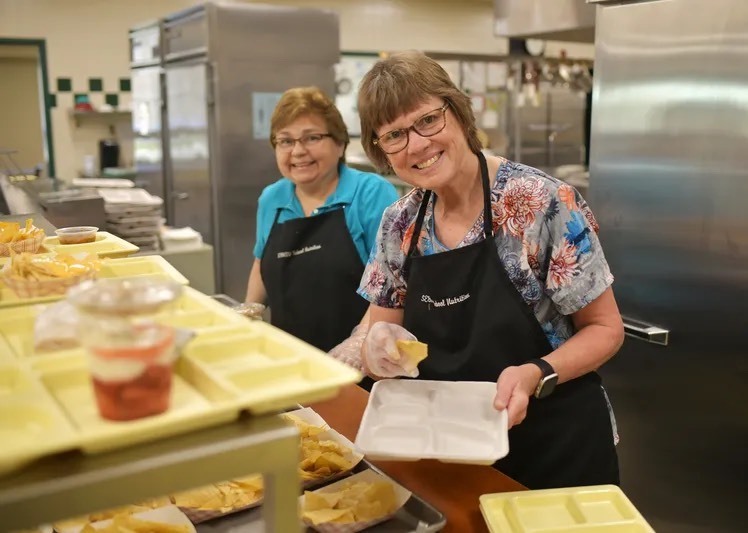 LaCroix, who has been working in the district for almost two decades, and other lunch staff said they felt similarly.

“I like my job,” LaCroix said. “I like coming into work and I look forward to it.”

Lambert said that the district making a day to honor their work makes her feel appreciated and “gives you the strength to keep going.”

The group of workers has all worked together at some point between the different schools in the district and will often help each other remember when they started working in the district or the ingredients they use in popular meals such as quesadillas.

“Cumin, garlic powder and chili powder,” said Provencher, who also has been working in the district for more than 20 years. “The quesadillas are always a hit.”

Each week, the workers make three meals from scratch for the students. 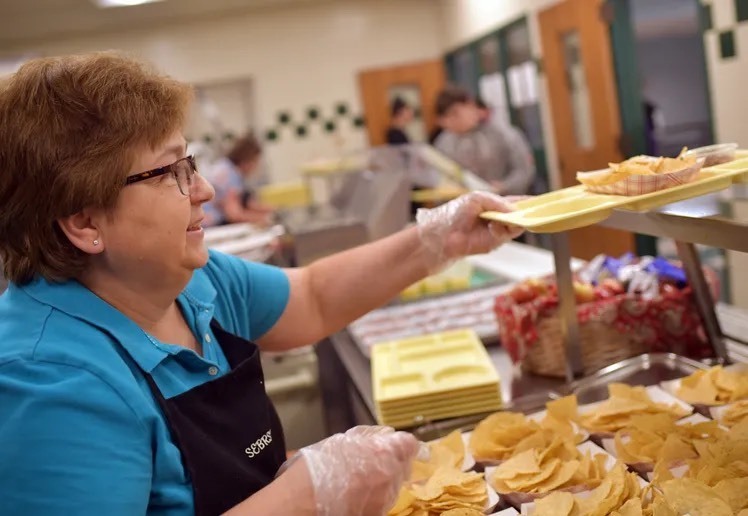 Provencher said that she and Lambert are so close that they will often finish each other’s sentences. “We've worked together for so long that she finishes my sentences,” Provencher said. “If I can't get it out, she knows how to finish it."  Lambert also said that the crew at Knox Trail Middle School is the funniest among the different schools.

While the work can be fun, it also requires punctuality and commitment since students depend on the workers to feed them at the same time every day, multiple times per day.

“We have a really tight time frame. We can’t be late,” Lambert said.

The workers have to quickly arrive in the morning and begin preparing breakfast, with a short turnaround to also begin preparing lunch, Food Services Director Brianne Pulver said.

“These ladies serve breakfast within 15 minutes of them arriving,” Pulver said. “We have our second breakfast and then we have lunch.”

She said the only rule in the cafeteria is that when students come in and take a fruit or vegetable, they say "please" and "thank you."

“We have them come through the line, they punch in their number, they get to learn the value of ‘please’ and ‘thank you,’ and they get to make the choice of what they want,” Pulver added. “The meal pattern now allows them to take a fruit, a vegetable or fruit and vegetable.” 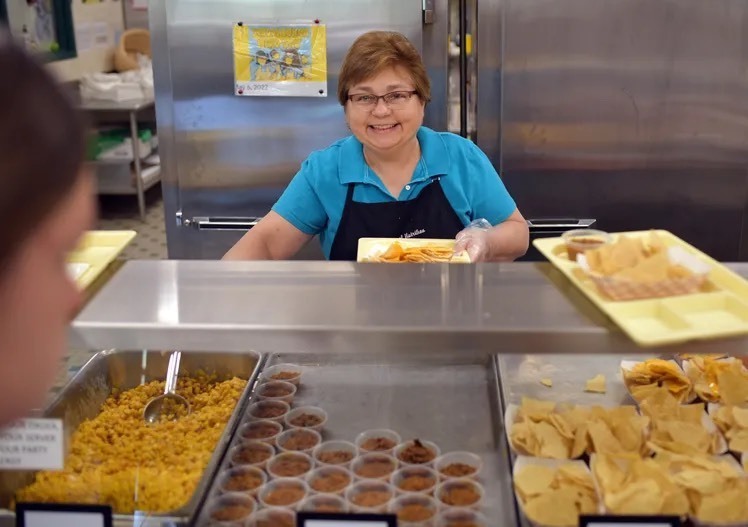 Lambert said that students will often come back for a second serving of fruits or vegetables.

At Knox Trail, students are given the opportunity to get “breakfast after the bell,” she said.

“It’s the only school where we do it. The kids have the opportunity to take breakfast at 9 o'clock as opposed to when they come in at 7 o'clock,” Pulver said. “That way they have time to acclimate themselves and then choose whether they want to have breakfast or not.”

Pulver said they were able to serve about 900 students last month that they typically wouldn’t have been able to serve if not for the second optional breakfast.

“The district right now is 54% free and reduced which, when I started in 2019, it was only 40%,” Pulver said. “The state of Massachusetts, if you're above 50%, you'll now have to offer breakfast after the bell, so we're trying it this year to kind of get everybody into the idea and build it into the schedule for next year.”

A guidance counselor at Knox Trail reached out to Pulver about adopting the policy earlier since teachers were paying for snacks using their own money, she said. “Now we're able to bridge the gap between breakfast and lunch, which is huge, in my mind.”

However, this also means that school food workers at Knox Trail have an even tighter time frame to cook and serve food, Lambert said.

The staff also has to prepare the cafeteria and kitchen before students arrive and then also clean and break down the kitchen and cafeteria after they’ve finished.

“We want to make sure that everybody knows who we are,” Pulver said. “That we were the guys that were helping serve meals. We're like the mailmen of the food service.”

Pulver, who began her role in the district in November 2019, said she was particularly proud of the staff members because of the way they rallied to ensure that students were being fed even when not in school during the pandemic.

She said that it soon escalated to delivering about 500 meals per day, between serving 250 students breakfast and lunch, during the summer using buses.

Paige said that the buses were her favorite part of pandemic work.

The group also had to juggle making and delivering food last minute to students whose families may have forgotten to submit an order, which would often result in Pulver having to scramble to deliver the food while nine months pregnant.

She said that they would prepare and deliver a week’s worth of food on a daily basis, using buses to drive around the district and deliver the food to students’ homes.

At one point, as students were beginning to transition back to in-person learning, the cooking crew from the high school and middle school combined to not only serve the returning students but also continue serving the students who were still remote, Pulver said. 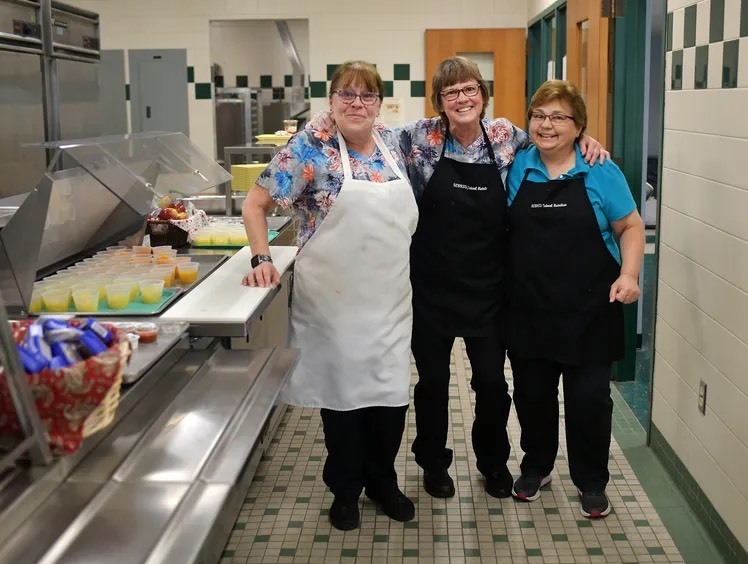 The workers will also work during the summer, providing lunches to students participating in summer activities such as 4-H camp, as well as providing meals to students from surrounding districts including Charlton and Leicester, Provencher said.

Despite the long hours and physically demanding work, the work remains popular enough that some former workers will come and work in the kitchen if extra support is required, Pulver said.

“We get retired staff to sub for us. They can’t get enough of it,” she said. “They love subbing because it’s a commitment.”

It is also an example of the camaraderie the workers have formed throughout the multiple decades they have all worked together, willing to lend a hand even after retiring, Lambert said.